A bylaw was passed in 1881 to ensure that a timber-framed style of construction, the ‘composite system’, was used for all new buildings. The buildings were wooden framed with infill panels of brickwork which all rested on a timber ‘ring’ beam (later steel) at ground level so that the building could be jacked up and the foundations raised if subsidence did occur. The structures could also withstand more movement in themselves as lime mortar was used in building the brick panels and this allowed some flexibility.

In 1891 the “Brine Pumping (Compensation for Subsidence) Act” was passed by Parliament which provided for the setting up of compensation boards, collection of an annual levy of 3d per 1,000 gallons of brine pumped within their district and assessment of claims for damage along with other powers.

The loss of overseas markets, meant an over-production in Cheshire causing a chaotic market and gradual decline in the rocksalt industry at the end of the 19th Century. In 1888, Salt Union was formed as a conglomerate of some sixty-six salt operators to endeavour to bring some order to the markets, but the use of poor mining practices (and subsequent catastrophic collapses) in Northwich was the main cause of the ultimate demise of the industry in that area.

The Victorians were able to travel far more easily than previous generations due to the development and quick expansion of the railways throughout the country. Hence the opportunity to visit a town with buildings resting at alarming angles, and with life carrying on around it, was irresistible. Visitors flocked to Northwich in their thousands and with them came photographers with cameras and postcard sellers. So whilst the town of Northwich had to bear the consequences of the salt extraction with its subsiding buildings, the unique lopsided and sinking buildings were extremely well documented for future generations. 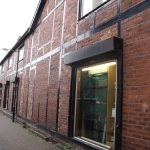 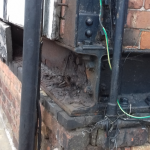