The Statue of Sir John Brunner

The Statue was erected in 1922.  It is a bronze statue on a granite plinth created by W. Goscombe John.  It is life size and depicts Brunner bearded, wearing a morning coat, in a stance, with his right hand outstretched, as if addressing a public meeting. 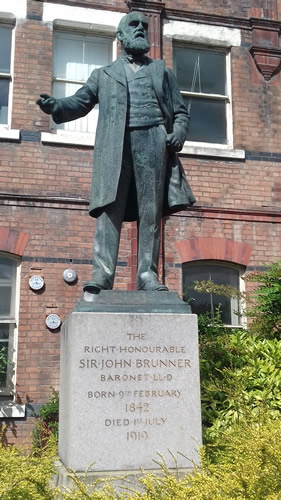 John Tomlinson Brunner (1842–1919) was born in Liverpool, and at the age of 15 started to work in an office in the city.  In 1861 he moved to work in the office of the alkali factory of John Hutchinson in Widnes where his older brother Henry was already working.  In time John Brunner became the manager of the office.  Hutchinson manufactured alkali by the Leblanc process, but this was an inefficient method for producing alkali, and was very damaging to the environment.  One of the chemists working in the company was Ludwig Mond, who had been attracted to a different process for making alkali, the ammonia-soda process.  By 1871 Mond had determined to build a factory to produce alkali by this process, and in this project he was joined by Brunner.  In 1873 Mond and Brunner bought the Winnington estate near Northwich in Cheshire, which included the country house, Winnington Hall.  The two families moved into the hall, one family occupying each wing, and the factory which became the start of Brunner Mond and Company was built nearby.  By about 1892 the company had become the largest producer of soda in the world.  In 1891, Brunner had become the chairman of the company, and he retained that position until April 1918, 14 months before his death.

After moving to Winnington, Brunner became interested in politics, and became a member of the Liberal Party.  He was selected as candidate for the newly created parliamentary constituency of Northwich, the Liberal Party were unable to form a stable government, and Brunner lost his seat at the general election the following year.  However the successful candidate died during the following year, and at the by-election in August 1877 Brunner regained the seat.  He continued to be the Member of Parliament for Northwich for over 30 years until he retired from the position in 1910.  Brunner was regarded locally as a kind and sympathetic employer and a generous benefactor.  Amongst his benefactions were a new library in Northwich, and the re-endowment of Sir John Deane’s College in the town.

Following Brunner’s death in 1919 a committee was formed to consider erecting a statue to his memory.  His son Roscoe commissioned Goscombe John to create a design, which was accepted by the committee.  The figure is in bronze and was made at the foundry of A. B. Burton in Thames Ditton.  The stonework was made by Messrs. Kirkpatrick of Manchester.  The statue was erected between the Brunner-Mond factories of Winnington and Willerscote, on a site near to the statue of Ludwig Mond.  It was unveiled on 10 June 1922 in the presence of Brunner’s sons, John and Roscoe, and his wife, together with Alfred Mond, son of Ludwig, Lord Leverhulme, and Louis Solvay.  In 1995 the statue was moved to its present position outside Mond House, the headquarters of the company founded by Brunner and Mond.  It was unveiled here by the Duchess of Kent, Brunner’s great granddaughter.  It stands next to the statue of Mond.