Towards the top of the ornate brickwork gable on the front of the HSBC building there is a carved stone panel of an eagle standing over a young child. This building used to be the Eagle and Child, sometimes called Hostelry, Hotel or Public House until it closed in 1939. 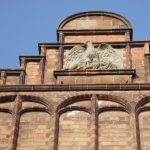 Called Imperial Buildings, this property was refurbished in 2016 after it had lain empty for several years. It was first built for William Henry Moreton in 1898, although another building had been on the site before then. Apparently it was used by individual professionals who rented rooms there.  By 1922 the Union Bank of Manchester had bought the building and after extensive building works, particularly the restyling of the external ground floor walls. They moved in in 1923 and were eventually taken over by Barclays Bank. The safe still remains and during the latest renovation works the 1950’s Chatwood Milner safe door was uncovered, the open door having been hidden behind stud walls. Too big and heavy to remove, the safe and its door have now been turned into a sound proofed music room, which was used in 2016 by Merrill Osmond of The Osmonds to practise in whilst on a tour of the UK. 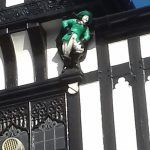 Not only are there green carved monsters keeping evil spirits at bay on this property but also four carved timber figures.  The figures at either end are the nightwatchman and town crier, with a man and a woman holding mugs and plates in between.  This couple are sometimes referred to as the mayor and his wife. 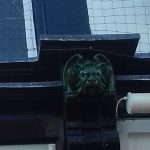 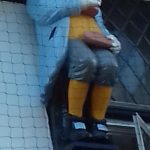 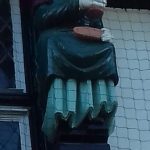 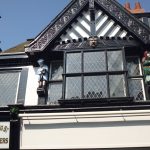 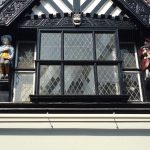 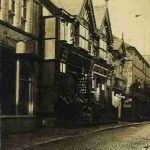 Bratts department store is over 150 years old. It opened in Northwich in 1860 and is one of the longest surviving shops in Northwich. The company is very proud of its history and has collected and maintained comprehensive archives. 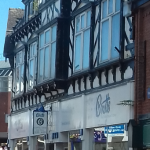 This building was made famous as the Weaverdale Cafe in 1998 when it appeared on the cover of The Charlatans’ greatest hits collection entitled ‘Melting Pot’ and the café was renamed after the album. The café has since closed. 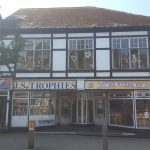 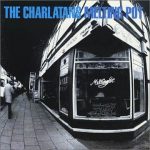 The external side wall of this building is a good example of a timber framed building where you can see the timber frames, the brickwork infill panels, as well as the ring beam and two jacking points. 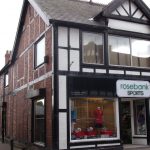 This was originally Parrs Bank that was eventually taken over by Nat West.  It was Parrs Bank that loaned Messrs Brunner and Mond their first £5,000 to start their chemical works business which they established in 1873 at the Winnington Works (later to become ICI).  Glass and timber boarding from the original banking hall ceiling have been preserved in the reception area of this building. The glass is so old the sides of the glass panes are no longer at right angles. 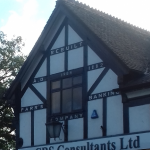 When the timber framed buildings were first built in Northwich the internal walls were made of vertical Timber boarding.  However the Brine Board discovered that boarding diagonally offered greater stability.  As a consequence all future buildings of this type had diagonal boarding.

Acknowledgement to John Chesworth for information.